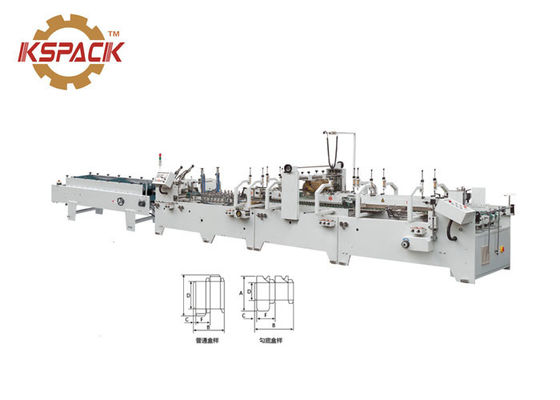 Adjust the fold box width according to the width size of fold box paper sheet. Only need to rotate the handwheel according to the width shown as Fig. IV to make the screw rod rotate, because the front and behind screw rods are connected with the chain, the two main plates will move in parallel at the same time while rotating the handwheel. After the two main plates reach the desired fold box width, the start the machine to have a trial and carry out the detail adjustment to the various fold box wheel, conveying belt etc. Finally reach the purpose that the paper sheets can pass successfully and the fold box position can be correct and have an enough adhesive force.

For the convenience to open the straight line box, the two pressed trace parts without folded need to pre-fold. Regarding the box needed to pre-fold, mount and adjust the pre-fold properly. The box outputs from the automatic feeding device (paper feeding part) and then enters the pre-fold device, In the pre-folding part, the first fold and the third fold can be exchanged by 180 degree and 90 degree. The second fold and the fourth fold can be molded in 180 degree, the special design is also available. The pre-folded paper box opens very easily on automatic packer,especially the medicine box

Our products are sold all over the world, you can rest assured.

描述 描述
Get a Quote